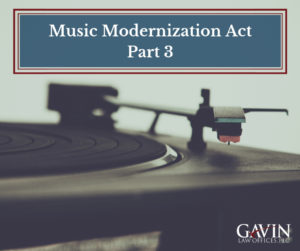 Concluding our coverage of the Music Modernization Act (MMA), this article explores the final Title III of the bill, the “Allocation for Music Products Act” or AMP Act. (To read more about the bill generally, visit the prior blogs Title I and Title II.) Whereas the other two titles have focused primarily on songwriters and musicians, the AMP Act is the Copyright Act’s effort to recognize the roles of producers, mixers, and sound engineers in the creation and production of a sound recording by granting them a statutory right to royalties in from digital performance services. Critically, thanks to the AMP Act, producers, mixers, and sound engineers will not need to enter into contracts that explicitly establish compensation for digital transmissions.

As reported by IP Law Watch, the AMP Act “codifies the requested royalty allocations from artists to studio professionals that SoundExchange[1] has honored since 2004. (For more information see S. Rept. 115-339 (115th Congress Sept. 17, 2018) (Report of the Committee on the Judiciary to accompany S. 2823, The Music Modernization Act). In particular, the AMP Act allows SoundExchange to receive a “letter of direction” from an artist to “distribute, to a producer, mixer, or sound engineer who was part of the creative process that created a sound recording, a portion of the payments to which the payee would otherwise be entitled from the licensing of transmissions of the sound recording.” Although similar allocations are already in place for many, if not most, sound recordings after 1995, this authorization granted by the AMP Act is unique as it enables a more direct, and ideally efficient, process.

There is one minor wrinkle to the above guidelines for sound recordings fixed before November 1, 1995: the relevant sections of the AMP Act—Section 114(g)(5)(B) (pre-1995 recordings) and Section 114(g)(6)(E)(right to receive payments)—do not go into effect until January 1, 2020. This delay is not a bad thing though; rather, it is to provide SoundExchange the necessary time to prepare and upgrade its own internal processes to best accommodate the AMP Act.