By now, many of you have likely heard of the California Consumer Privacy Act (the “CCPA”).  The law, passed by California’s State Legislature in 2018, became effective on January 1, 2020.  The CCPA gives California residents more control over the personal information that businesses collect about them, granting residents the right to know how businesses use/share their personal information, the right to request that a business delete their collected personal information, and the right to opt-out of the sale of their personal information.  The CCPA borrows many of its provisions from the European Union’s General Data Protection Regulation (“GDPR”).  While many believed that the GDPR (adopted by the EU in 2016) would serve as a catalyst for the United States to enact a similar data privacy law, the U.S. has yet to pass, or even seriously consider, any comparably comprehensive data privacy legislation at the national level.

While several other states have passed data privacy and protection laws since 2018, arguably none have enacted laws as extensive as the CCPA.  However, due to revisions California’s legislature made to the original text of the CCPA, as well as certain language included in the Final CCPA Regulations published by California’s Office of the Attorney General (OAG) earlier this year, many Californians and consumer advocacy groups do not believe the CCPA goes far enough to protect consumers’ personal information.  Thus, on election day this year, California voters approved ballot initiative “Proposition 24” – the California Privacy Rights Act of 2020 (the “CPRA”).  The CPRA gives additional rights to California residents and further limits businesses ability to use/sell/share personal information, amending and expanding upon the CCPA.

Most of the CPRA’s substantive provisions will not become effective until January 1, 2023.  However, businesses may begin preparing for compliance with the CPRA by familiarizing themselves with the following highlights of the new law:

The above highlights, as well as the other provisions of the CPRA, bring California’s data privacy laws closer to resembling the GDPR.  It will be interesting to see whether other states follow suit in 2021.  While Virginia established a task force to study data privacy issues last General Assembly session, it has not yet passed any data privacy law as comprehensive as the CCPA/CPRA.  The Commonwealth, as well as numerous other states, will likely consider data privacy legislation next year.

In the meantime, while the effective date of the CPRA may seem far away, California’s OAG continues to publish updates to the CCPA Regulations and to enforce existing law.  For example, while the Final Text of the CCPA Regulations was published in August, the OAG released a fourth set of modifications to the Regulations on December 10, 2020.  The latest modifications include further clarifications on the CCPA, including much-awaited guidance on the “Do Not Sell My Personal Information ‘Button.’”  Thus, businesses still need to regularly review their CCPA compliance while they prepare for the CPRA.  You can find more information on the CCPA, including updates, here: https://www.oag.ca.gov/privacy/ccpa.  Gavin Law Offices will continue to track data privacy-related issues in California, Virginia, and across the U.S. and abroad, and are here to help you navigate this complex field of law.

Rina Van Orden sat down with Taylor Quinn from Filmspire to chat about how Gavin Law Offices assists clients in protecting their intellectual property and navigate the legal landscape during these changing times.

After the European Union passed the General Data Protection Regulation (“GDPR”) in 2016, the world watched to see whether the United States would adopt a similar data privacy law at the federal level.  While U.S. lawmakers, the tech industry, and consumer advocates have been working towards a federal data privacy bill, Congress has yet to pass, or even seriously consider, such legislation.  However, a federal law may finally be on the horizon – two data privacy bills have been introduced in the Senate, and a bi-partisan bill is currently being developed by a House committee.  In honor of Data Privacy Day, celebrated internationally on January 28, we explore the current status of data privacy laws in the United States.

In the absence of a comprehensive federal law, numerous states across the U.S. have passed their own data privacy legislation, including, perhaps most notably, California.  The California Consumer Privacy Act of 2018 (“CCPA”) became effective on January 1, 2020, creating new obligations for covered businesses regarding privacy notices and the handling of California consumers’ personal information.  The CCPA only protects Californians’ personal information but may apply to companies that do business in California even if they are not physically located in the state.  Businesses continue to scramble to understand and comply with the CCPA, which is only one of many state and industry-specific laws forming the current patchwork of data privacy laws in the U.S.

However, a federal solution may be on the horizon.  In November 2019, two data privacy bills were introduced in the Senate – the Consumer Online Privacy Rights Act (COPRA) and the United States Consumer Data Privacy Act (CDPA).  The bills share many similarities, including enforcement by the Federal Trade Commission, and would provide individuals with new rights regarding their personal information.  However, COPRA (introduced by Sen. Maria Cantwell, D-Wash.) and the CDPA (introduced by Sen. Roger Wicker, R-Miss.) vary on some important points, leading many to wonder whether either bill could make it through Congress.  For example, COPRA would preempt only state laws that expressly conflict with the Act, leaving state laws that provide additional protection to consumers intact, whereas the CDPA would preempt all state laws regarding data privacy (except for data breach notification provisions), including the CCPA.  COPRA would also allow for an individual private right of action, similar to the CCPA, while the CDPA would not.

Additionally, the House Energy & Commerce Committee recently released an initial draft of a bi-partisan data privacy bill.  Bi-partisan support will be critical for Congress to enact a federal data privacy law, but the initial House bill does little to reconcile the differences between the two introduced Senate bills.  Further, while this federal legislation is pending, numerous states are actively considering data privacy bills themselves.  Specifically, multiple states are in the process of considering data privacy legislation mirroring the CCPA.  In other states, such as Virginia (where the Virginia Privacy Act was introduced earlier this month), representatives have pulled provisions from the CCPA as well as the GDPR to create a more tailored bill for their state legislature to consider.  With many states in their legislative sessions and various federal bills pending, 2020 is already shaping up to be an exciting year for data privacy in the United States. 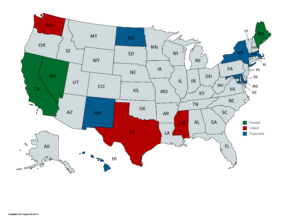 Earlier this year, we wrote about the European Union’s General Data Protection Regulation (GDPR) and how California was following suit by passing the California Consumer Privacy Act (CCPA). This law will come into effect on January 1, 2020.

The CCPA protects California residents by providing heightened privacy rights and consumer protection regarding the collection of their personal data online.  While California residents are the protected class, businesses nationwide will be affected by the CCPA.  Any company whose website is accessed by California residents is subject to the requirements of the CCPA.  Potential damages for violation of the CCPA include statutory or actual damages, as well as fines for intentional and unintentional violations; therefore, it is imperative that businesses ensure their websites, privacy policies, and data collection procedures are compliant with the CCPA as soon as possible.

Additionally, a patchwork of states have started drafting and passing privacy laws in the CCPA’s wake. The infographic above shows which states are proposing and passing new legislation.

One of the two states that has officially passed a data privacy law is Nevada.  Although only passed in May of this year, it will be effective a full three months earlier than the CCPA, October 1, 2019.  This law appears narrower than the CCPA, as it specifically addresses a consumer’s right to opt out of the sale of their personal information, while the CCPA covers the whole gamut of an individual’s rights to data.  Additionally, this bill does not include a private right of action, but rather relies on the Attorney General to enforce it. We are not at all shocked that Nevada would be one of the earliest adopters of additional privacy legislation, however. What happens in Vegas, stays in Vegas.

The other early actor is Maine, whose governor signed one of the strictest internet privacy protection bills into law just this month. Maine’s new privacy law, which goes into effect on July 1, 2020, will require internet service providers to seek consent from their consumers before selling or sharing their personal information with any third party.  Critics have attacked this law on various grounds, arguing that the law conflicts with federal laws, the U.S. Constitution’s Interstate Commerce Clause, and even the right of free speech.  Yikes.  We’re interested to see how these challenges will play out in the courts.

Five additional states have proposed legislation.  All of these proposed bills have pros and cons, but we will look into them in more depth as they progress.

Additionally, Mississippi, Washington, and Texas all attempted to pass legislation this year that addressed consumer privacy.  While these bills did not make it through the legislatures, these states are participating in active discussions, which is just more inspiration for the remaining states.

A federal law may soon address this developing patchwork of state laws.  As early as November 2018, various House and Senate Committees held hearings and drafted federal legislation regarding consumer data protection. We expect to hear more from Washington D.C. by August 2019, but again, we’ll keep you posted.

One of the most significant data privacy laws enacted, the European Union’s General Data Protection Regulation (GDPR), brought substantial changes for organizations which are located in the EU or process the personal data of individuals residing in the EU.  In light of the one year “anniversary” of the GDPR, which came into force a year ago on May 25, 2018. Here is a short overview of the current global data privacy law climate and noted some upcoming changes and trends that may impact businesses internationally.

Based on the above, we anticipate that new data privacy laws and changes to existing data privacy laws will continue to emerge.  Frequently, countries’ motivation for passing or updating legislation is to enjoy the privileges of transferring personal information between themselves and the EU under the GDPR.  While many believe the GDPR has not been enforced as zealously as they anticipated, the law has clearly impacted privacy laws on a global scale in its first year.