Every year, U.S. Customs and Border Protection (CBP) processes millions of cargo containers passing through the over 300 ports of entry into the United States.  CBP examines the imports, searching for – among other criminalities – violations of intellectual property rights.  The agency’s inspection process results in the annual seizure of thousands of imported counterfeit and infringing goods.

Trademark owners may not be aware of the major role CBP has in policing the infringement of intellectual property rights by foreign-sourced products.  In order to reap the benefits of the agency’s enforcement actions, trademark owners should consider recording their U.S. trademark registrations with CBP.  The process of recording a trademark is inexpensive and relatively quick, especially in comparison with civil litigation.  Moreover, recording trademarks with CBP may be an effective method of deterring, and discovering, potential infringements.

In order to record a mark with CBP, a trademark owner must have a federal registration for the mark on the U.S. Trademark Office’s (USPTO) principal register.  Trademarks on the USPTO’s supplemental register, common-law marks, or state-registered trademarks may not be recorded with CBP.  In addition to submitting an application and a filing fee ($190 per mark, per class), applicants may provide supplementary information and/or documents to assist CBP with enforcement.  For example, trademark owners have submitted “product guides” with information about identifying legitimate marks or infringing goods.

Trademarks approved for recordation will be added to CBP’s national database of protected marks (and copyrights, which may be recorded with CBP as well).  Having a trademark included in this database is a significant benefit of recordation.  CBP agents refer to the database to enforce intellectual property rights, and inclusion in the database ensures that CBP is aware of a mark.  The public has access the CBP database as well, which may deter potential infringers who can easily check to see which marks are being actively protected.

In summary, recording a trademark with CBP establishes a partnership between trademark owners and the agency that may help owners discover and reduce foreign infringements.  Please contact us with any questions regarding the recordation of your registered trademarks and/or copyrights with CBP.

There’s no better way to celebrate old friends than to visit them on their birthday.  So when the National Park Service’s birthday rolled around on August 25, Kat decided to fly to Yosemite.  Pictured here is her visit to Mariposa Grove to admire the majestic sequoias. 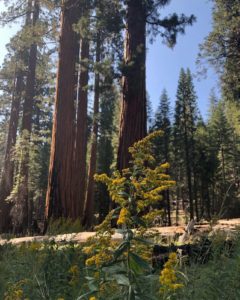 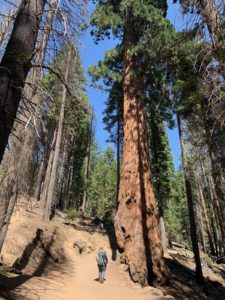 Happily, the National Parks had even more to celebrate.  Yosemite National Park, by the time of Kat’s visit, was able to restore the signage of several properties to their historic names.  Those properties include the Ahwahnee Hotel, the Wawona Hotel, Camp Curry, and the Badger Pass Ski Area.

Wait, what?  Why were their names changed in the first place?

In 2014, the National Park Service started looking for a new concessionaire company.  The winning company Aramark signed a contract purchasing all the furniture, equipment, and other physical assets of the previous concessionaire Delaware North, who had been providing their services to the National Park Service from 1993-2014.  Yosemite had used the above-mentioned names for the respective hotels, lodges, and resorts long before 1993; however, Delaware North registered trademarks for such names on its own despite such prior use by the Park Service.  As Aramark’s contract did not explicitly discuss any transfer of intellectual property, Delaware North argued that Aramark was unable to use “their” trademarks.

In response to Delaware North’s claims, the Park Service was forced to rename many properties as of March 1, 2016, when Aramark’s contract began.  The Ahwahnee Hotel was renamed the Majestic Yosemite Hotel, Camp Curry was renamed Half-Dome Village, the Wawona Hotel became Big Tree Lodge, and so on.  To long time visitors, these changes were hard to stomach.  While Delaware North offered to license the National Park Service “their” trademarks while the dispute was resolved, the Park Service refused, not wanting to acknowledge Delaware North’s rights as legitimate.

After a long negotiation process, Delaware North and the Park Service ultimately settled the resulting lawsuit in 2019.  The government ended up paying $3.84 million to Delaware North, while Aramark paid $8.16 million, and at the end of Aramark’s contract, Aramark will transfer ownership of the trademarks to the National Park Service at no cost.

While we are happy to see the matter resolved, what can be done to make sure such situations don’t happen in the future?  First, always read your contracts with specificity about intellectual property assets.  You need to make sure it is clear who owns and/or has rights in an particular asset.  You don’t want to build a brand around an intellectual property asset to which you don’t have all necessary rights.

Alternatively, could there be some public policy exemption where the National Parks Service can own any and all trademarks regarding park areas and lodges?  Such a concept is not unheard of.  Congress has in the past granted statutory trademarks to a number of organizations.  In such a case, an organization does not file a trademark application with the federal authorities, but rather, Congress grants special protection to that organization through a statute within the U.S. Code itself.  Some organizations with such protection include Boy Scouts of America, the U.S. Olympic Committee, and maybe less familiar, the National Tropical Botanical Garden.  So what do you think?  Doesn’t the National Parks Service merit this special attention from our lawmakers?