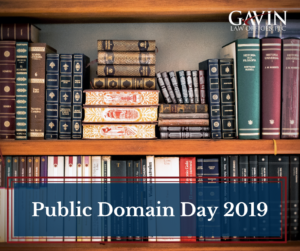 Some people think the most wonderful time of the year is Christmas, but starting 2019, we are going to receive gifts every January 1st.  Why is that, you ask?

What does it mean for a work to enter the public domain?

How long do copyrights last, anyways?

The term of copyright for a particular work depends on several factors, including whether it has been published, and, if so, the date of first publication. As a general rule, for works created after January 1, 1978, copyright protection lasts for the life of the author plus an additional 70 years. For an anonymous work, a pseudonymous work, or a work made for hire, the copyright endures for a term of 95 years from the year of its first publication or a term of 120 years from the year of its creation, whichever expires first. For works first published prior to 1978, the term will vary depending on several factors.

Why did works stop entering the public domain 20 years ago?

In 1998, Congress passed the Sonny Bono Copyright Term Extension Act, which effectively added twenty-one years of protection to works that were under the protection of copyright law.  This Act was incredibly controversial, and many believed that Disney lobbyists were the driving motivator behind the Act, as a copyright on Mickey Mouse was due to expire.  Works created in 1923 or later were therefore set to enter the public domain, not in 1998, but in 2019.

What works enter the public domain this year?

A variety of works enter the public domain, including the below that are particularly exciting.  However, Duke has published the full list, which you should feel free to peruse here: https://law.duke.edu/cspd/publicdomainday/2019/.